The bitterroot, Montana's state flower, is emblematic of the "Treasure State" - —beautiful, enduring, and treasured by generations. Prized by explorers Lewis and Clark, as well as innumerable native peoples, the everlasting bitterroot flourishes in the remote, rocky soils around Missoula.

A Source of Food

Native Americans have cherished the purplish-pink flower as a seasonal delicacy. Known as "Spetlum" in native languages, the bitterroot flower blossoms in the spring and summer near mountains and boulders. The root of the flower is removed from the ground and cleaned. The dried root can be stored for up to a year and was often traded as a luxury good. Because the root was bitter when eaten raw, it was often cooked and mixed with meat or berries before it was served.

According to Native American mythology, the bitterroot was created by the Sun in order to appease a doleful mother, crying from lack of food. The Sun turned her tears into the bitterroot. The Lewisia rediviva, the bitterroot's botanical name, is also known as the "resurrection" plant because it can survive as long as a year without water.

It fits the area

The genus name of the bitterroot flower, Lewisia, comes from the plant's modern benefactor, Meriwether Lewis of Lewis and Clark fame. He wrote about the plant in his famous cross-country explorations.

The bitterroot has been the state flower of Montana since 1895. It also serves as the namesake for many geographical features, such as Bitterroot Mountains, River, and Valley. 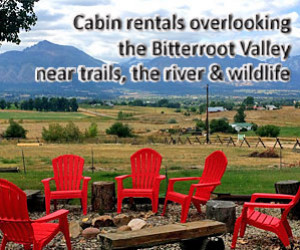